The Hipcats star in Don't Tell the Bride - the inside story ...

The Hipcats were excited to get the call that they had been asked to star in Don't Tell the Bride - a show where the groom had two weeks to organise a wedding on a fixed budget without the bride being told anything about it.  It has recently moved from the BBC to Sky 1 and has a huge following. 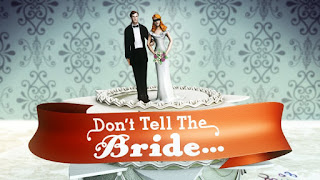 The Hipcats were asked as they wanted the evening to end with some great jazz and swing with a 1920s feel but also with some contemporary grooves to get people dancing - the band was very happy to oblige.

In terms of the booking, it was all agreed just four days before the wedding date!  Wedding bands are usually booked anything from 6 to 18 months in advance but not this time.  Luckily, the band were free, helped by the fact it was a Friday rather than a Saturday.

Over those four days there were conversations with the groom and the team at Sky and a key thing that had to be done was clear the songs the band were going to play as some of them were allowed to be broadcast and some were not - interestingly King of the Swingers, Bear Necessities and Sway were struck off the list but Hit the Road Jack, Cheek to Cheek and Moondance were fine.

The final set list wasn't approved until 8.30am the morning of the wedding!

The band travelled to Brighton that day, meeting the crew and checking out the venue and were interested to see the whole process at work.  It seemed to be genuinely how it was on TV, the groom had organised the 1920s themed event, bought his wife the wedding dress and the whole day had gone really well.

The people at Sky were very unobtrusive, to the extent that they had small HD cameras and no lighting and so could have been any wedding video team rather than broadcasters.

The band performed two sets which the crowd loved, to the extent that the bride felt that she really needed to join the band onstage with backing vocals - a certain amount of alcohol may have encouraged her but she had a great time.  Unfortunately the cameras had left at that point and they also missed the food fight at the end but by then the band were safely in their cars and ready for the ride home.

Overall it was a great experience and Chris, the groom, expressed his huge thanks to the band for contributing to a brilliant day.

Transmission date yet to be confirmed.