Stardust Music were chosen by Waitrose to be their jazz band for the big Jubilee event in Warminster on Sunday 3rd June.  The band greeted the crowds as they entered the park with a mix of upbeat swing-jazz and even the occasional showers didn't dampen spirits. 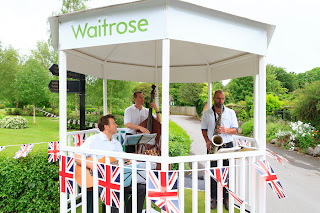 An 'awesome' band said one of the Waitrose representatives at the event and the families who were dancing along to the band certainly seemed to agree.

Find out more about hiring the jazz band at www.Stardust-Music.co.uk
Posted by LA Music at 09:48